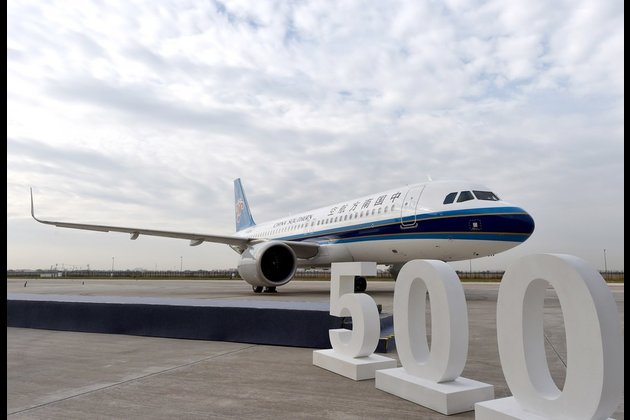 BEIJING, Jan. 13 (Xinhua) -- Airbus delivered a total of 99 commercial aircraft to China in 2020, representing 17.5 percent of its annual global deliveries, according to Airbus China.

China's market has played a vital role in sustaining and leading the global civil aviation industry to recover from the severe impact of COVID-19, Airbus China said.

The aircraft deliveries supported the continuous growth of China's civil aviation fleet and promoted its stable development, the company said, adding that Airbus endeavored to ensure all deliveries in full compliance with health and safety regulations for each individual involved.

By the end of 2020, there were more than 1,900 commercial Airbus planes serving the Chinese market, according to data from Airbus China.

"China's civil aviation market has shown its resilience during the pandemic. It has brought confidence to global aviation industry players like Airbus," said George Xu, CEO of Airbus China.

Airbus in 2008 inaugurated the Airbus A320 family final assembly line in north China's Tianjin. By the end of 2020, Airbus had assembled and delivered more than 500 commercial aircraft from the facility.

Airbus is committed to extending the capacities of its Tianjin facility from narrow-body A320 series aircraft to wide-body A350 series aircraft, according to Airbus China.

The first A350 aircraft delivery from its Tianjin center is expected in the first half of 2021, the company said.

China's civil aviation sector has remained the world's second-largest in terms of passenger trips for 15 years, according to the Civil Aviation Administration of China (CAAC).

The latest statistics from the CAAC show that China's civil aviation sector handled 420 million passenger trips in 2020 -- 63.3 percent of the 2019 figure -- indicating recovery from the COVID-19 pandemic fallout.