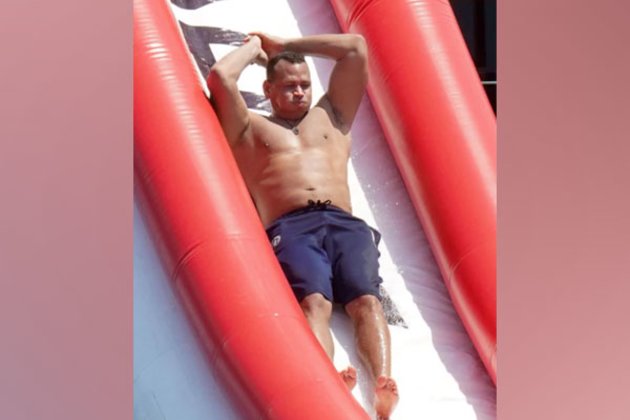 Washington [US], July 24 (ANI): Seems like Alex Rodriguez has ultimately decided to move on from his ex-fiancee actor Jennifer Lopez in an interesting way as the former American baseball player was recently spotted sliding back into single life on a yacht with some bikini-clad women along the French Riviera.

According to TMZ, the A-Rod was soaking up the sun and enjoying the water while vacationing in Saint-Tropez this week, while showing off his buffed body and having some fun on a giant inflatable slide.

The former MLB star who is renting a summer house in the Hamptons- not too far away from J Lo's residence- has clearly decided to move on. Sources connected to Alex told TMZ that the yachting adventure is to celebrate his upcoming 46th birthday, and the folks on board with him are friends, family, and his corporation employees.

Since their breakup, Alex has been keeping up a low profile- both publically and socially. But, on the other hand, J Lo has been spotted multiple times with her old flame, Ben Affleck. As per earlier reports, she has been house-hunting in Los Angeles, with Ben's help.

J Lo and Ben were engaged in 2002 but split in 2004. They co-starred in the films 'Jersey Girl' and 'Gigli' together. They postponed their 2003 wedding days before they were set to walk down the aisle, then officially split by January 2004.