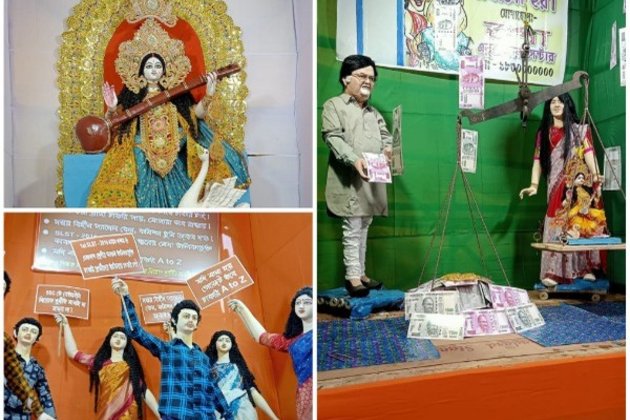 Kolkata (West Bengal) [India], January 23 (ANI): With Saraswati Puja on January 26, a puja pandal in Kolkata, in an attempt to highlight the Bengal Teacher Recruitment Scam, themed the pandal on the alleged corruption.

The pandal has been organised by the late BJP worker Abhijit Sarkar's brother, Biswajit Sarkar. Abhijit Sarkar was allegedly murdered during the post-poll violence in West Bengal after Assembly Election.

The Puja pandal is divided into three sections. The first section shows shops where "an unqualified candidate can become a teacher if they pay huge money."Inside the shop, former Bengal Minister Partha Chatterjee and his close aid Arpita Mukherjee can be seen standing surrounded by money and gold which were seized by the central agencies.

On the second portion of the pandal, there are two cages--one cage has books, and the other cage has the Goddess Saraswati idol. Through this, the makers tried to depict "education and Goddess Saraswati caged in West Bengal."In the final section of the Puja pandal, the makes have shown aspirants who are protesting for not getting jobs despite qualifying in the Teacher Eligibility Test (TET) and Staff Selection Commission (SSC).

The organiser Biswajit Sarkar while speaking to ANI said, "This is the only way to showcase the protest of the teachers against the corruption which is happening in Bengal where education is at stake. Bengal is the place where meritorious candidates have no place for the job."Former State Education Minister Partha Chatterjee and his close aid Arpita Mukherjee are accused of the Teachers Recruitment Scam in West Bengal. (ANI)